HES purchases all of its electricity from the Tennessee Valley Authority (TVA). This is fortunate because TVA provides some of the most affordable electricity in the U.S. In addition, HES has some of the most affordable electric rates in the western Kentucky region. All HES electric rates must be approved by TVA, who serves as the regulatory agency for HES.

All Rates Listed Below are Residential Electric Rates for the month of June, 2020. 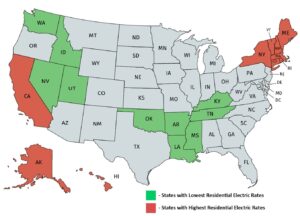 ©2020 Hopkinsville Electric System | Privacy Policy Website design & development by Thrive Creative Group, LLC.
Our site uses cookies to improve your experience. We hope this is okay. If not you can opt-out. Find out more.