Unfortunately, we’ve received word from a customer that scammers are once again trying to scam our customers out of...... Read More »
X

So You Want To Install Solar Panels On Your House

The financial aspects of installing solar can be very complicated making it difficult to determine if solar will truly benefit a homeowner in their particular circumstances. This information has been created to give our customers a framework for assessing the financial aspects of installing solar panels on their home. Depending on the system configuration, a solar array may or may not produce enough energy to pay for itself. Because of this, solar installation companies sometimes create confusing and even misleading mathematics that make it difficult to know whether installing solar panels will truly benefit the purchaser.

In the simplest terms, a basic cost-benefit analysis needs to be performed. This analysis calculates the total cost to install the solar panel system and compares it to the estimated dollar value of the electricity generated to determine whether the system will pay for itself and possibly save the owner money before the end of the life of the system, which is typically 20-30 years.

The first part of this analysis is to determine the total installed cost of the system. If you pay cash for the system, just add up all the costs that were involved to install the system. But because installing solar panels is typically expensive, most people will finance the system and make monthly payments for a fixed period of time. To determine the total system cost, take the amount of the monthly payment times the total number of payments (ex. $225 month x 120 months = $27,000 total system cost) and add in any other upfront costs (down payment, electric panel upgrades, solar panel system startup commissioning, etc.) that were not included in the loan to determine the total installed system cost. Some companies promise to give you money to cover the first year’s payments. Rest assured that this “free” money is most likely being tacked onto the total system cost, which you pay interest on for the life of the loan. As the old saying goes, “There’s no such thing as a free lunch”. 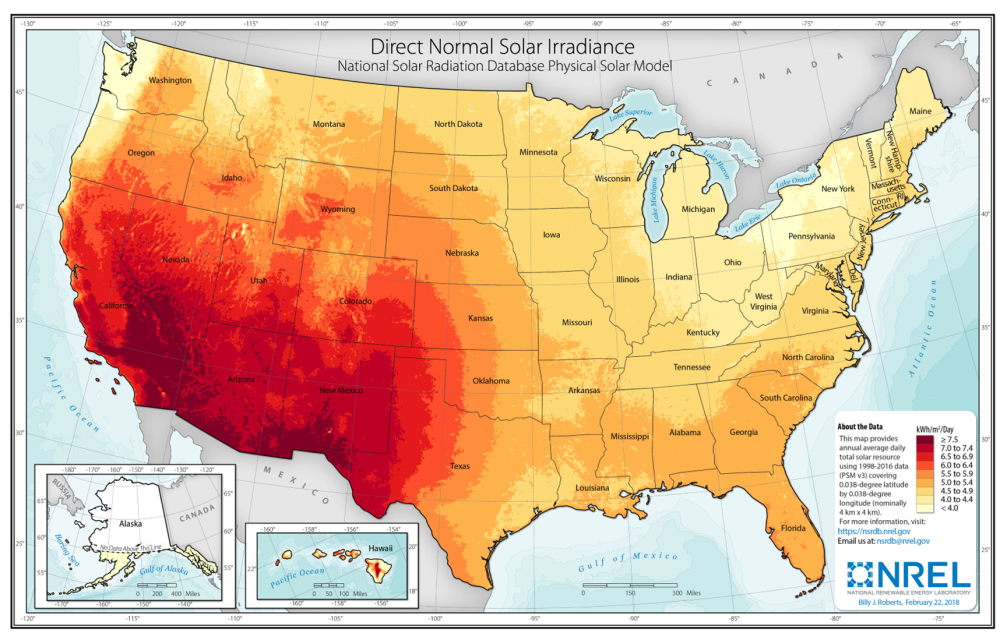 The next part of the analysis is to determine how much electricity your solar panel system will produce over its life. Since this is based purely on assumptions, this can be more difficult to calculate. But there is a reputable method that can provide reasonably accurate estimates. This is the PVWatts Calculator designed by the National Renewable Energy Laboratory (pvwatts.nrel.gov/pvwatts.php). This free online calculator takes information about your solar panel system, such as your location, system size, compass direction of roof, angle of roof, electricity rate, etc., and then estimates how many kilowatts of electricity your system will generate each year and what the estimated dollar value of the electricity will be based on your local electricity rate.

You also need to plan for how you’ll use that electricity. One critical aspect of electricity is that it must be consumed at the instant it is created, unless a battery is used to store it. If the goal is to use all the electricity created by your solar panel system, then a battery (or batteries) with enough capacity must be installed to store the electricity produced during the day, so that it can be used for non-sunshine hours. Currently, residential-sized batteries do exist, but they can be costly to purchase and install. 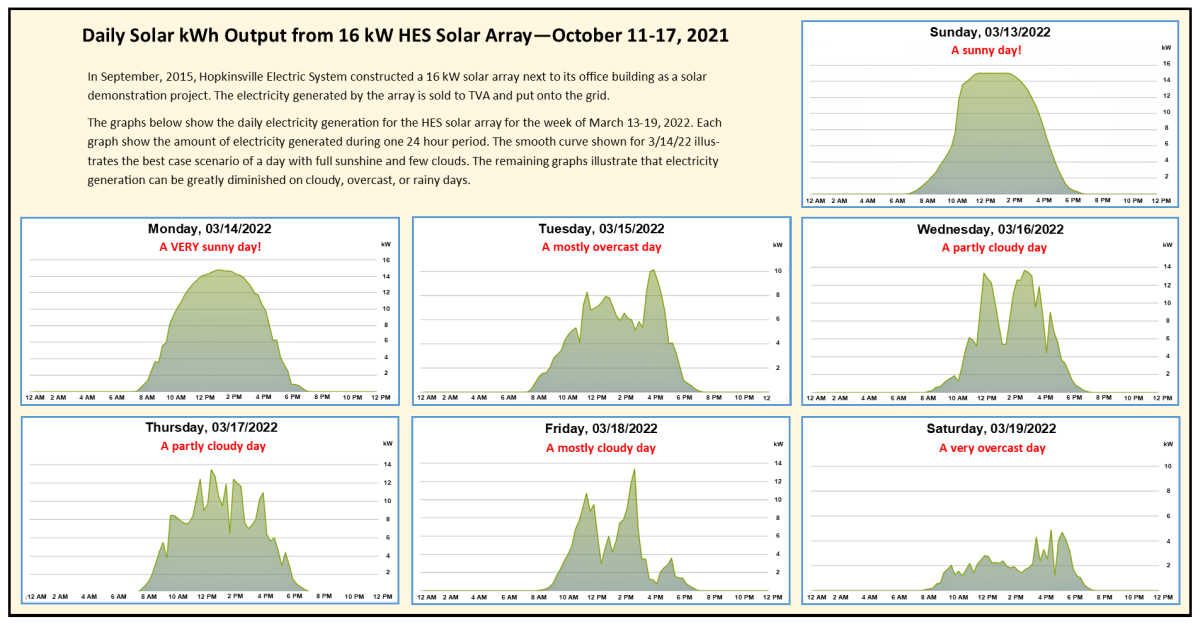 So does this sound complicated? For the most part, it is. But with most solar panel systems costing $15,000 and up, it pays to be very certain of all the financial aspects involved with the purchase of the system. Most solar panels last 25-30 years, and it is not uncommon for the loan payment period to be between 10-20 years. So before entering into a long-term agreement, it is very important to know if and when the system will pay for itself, and how much additional benefit will be gained up to the point the system reaches its end of life.

To assist our customers in seeing an example of a cost benefit analysis, we’ve created an example using the home and actual electricity usage of a real HES residential customer. This customer’s home is 2,812 sq.ft. and has an average monthly electric bill of $170. We asked a reputable solar installer from TVA’s Green Connect Program to put together a cost estimate for a 11.4 Kw solar array with three Tesla Powerwall batteries with 40.5 kWh of electricity storage capacity. This solar array would fill the entire south facing roof with thirty 380 watt solar panels. The three Tesla Powerwall batteries would allow the home to store and use most, if not all, of the electricity created by the solar array to have the greatest impact on the home’s electric bill. The electricity generation of the solar panel system has been calculated using the online PVWatts solar calculator. We’ve taken great care to present the most accurate information possible. Although the Solar Adjusted Electric Bill (SAEB) would be greatly reduced, the combined cost of the SAEB plus the monthly loan payment would greatly exceed the cost of the customer’s standard electric bill with no solar array installed. 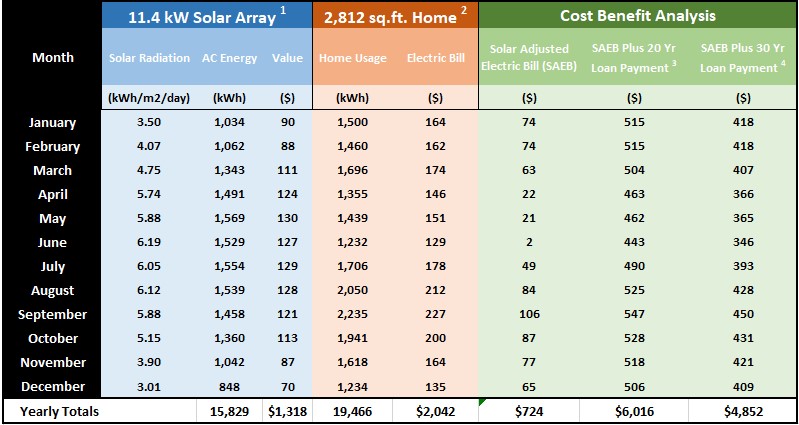 The real telling part of the analysis is projecting all of the costs forward for the next 25 years, which is the typical life of a solar array. To calculate the value of the solar energy captured by the 11.4 kWh system for 2021, the 2021 average monthly HES residential electric rate of 8.301 cents per kilowatt hour was used. To calculate the solar energy value for all subsequent years, a historical analysis of the HES residential electric rate over the last decade was conducted to determine the yearly price change. A yearly increase of 1.3% per year was calculated. So to determine each year’s solar energy value, the previous year’s value was multiplied by 1.3 to find the next year’s value. This same 1.3% increase was used to calculate each subsequent year’s regular electric bill for the house without solar panels.

The result? Over 25 years, the $38,641 of energy created by the 11.4 kW solar array would not be enough to pay off the initial installed cost of $57,403 (after $20,197 tax credit). How could this be, since the sun’s energy is free? There are two reasons. First, the cost of the solar array and three Tesla Powerwall units to capture and store all the free energy is expensive. And second, because HES residential electric rates are so low, the value of the captured “free” electricity is not as high as it would be in other parts of the country. Had this same solar array and battery system been installed in California (see bottom row above), where the average residential rate was 25.59 cents per kilowatt hour in 2021, the solar panel/battery system would have not only paid for itself, but also made the homeowners some money.

The lesson? Make sure you know all the total installed cost of your solar array system, the anticipated value of the electricity your system will generate, and how you will use that electricity to your greatest benefit. Otherwise, you may end up paying more for your combined electric bill and solar array monthly payment than if you just paid your electric bill.

©2022 Hopkinsville Electric System | Privacy Policy Website design & development by Thrive Creative Group, LLC.
Our site uses cookies to improve your experience. We hope this is okay. If not you can opt-out. Find out more.